Tice comes to Monmouth from North Central College in Naperville where she was an assistant coach for the last two seasons while earning a master's degree in sports leadership.

"Jordan comes to us with the playing and coaching background we were looking for," said Monmouth College Director of Athletics Roger Haynes. "She comes highly recommended for her ability as a recruiter and her overall knowledge of the game."

The Monmouth women's lacrosse program, which competes in the Midwest Women's Lacrosse Conference, sat out the 2021-22 season because of the COVID-19 pandemic and a late coaching change. Tice is the program's second head coach.

"I am really excited to be at Monmouth, make it my own and bring success to the program," said Tice. "I look forward to joining the community of sports professionals in the athletic department, collaborating with them on Fighting Scots athletics and getting to know the students."

Tice played at Goucher College, an NCAA Division III program in Towson, Maryland, just outside Baltimore. She was a midfielder and attacker for the Gophers, netting 10 goals and 10 assists in her senior season. Tice was named to the Landmark Conference Academic Honor Roll three times during her playing career.

Tice also spent a semester at the University of St. Andrews in Scotland, where she played lacrosse and won a conference championship and MVP award in the British University and College Scottish 1A.

In addition to being an assistant at North Central for the last two seasons, Tice has coached club lacrosse. She coached at Lakeshore Lacrosse in 2019 before joining the East Ave Lacrosse Club.

A native of Batavia, Illinois, Tice graduated from Batavia High School, where she played lacrosse. Tice is also passionate about animals, working at the Friendly Vet Animal Hospital while at North Central. Joining her at Monmouth will be black lab, Millie. 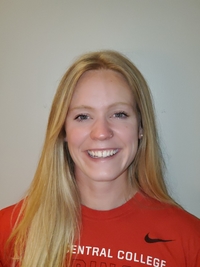