No classes were held Tuesday at Monmouth College, but there was no shortage of learning being done as academic achievements of all disciplines were celebrated and on display all over campus.

The College held its annual Scholars Day, which includes the traditional Honors Convocation in the morning, a lunch honoring donors to College scholarships, and oral and poster presentations in the afternoon.

"Great things happen every day at Monmouth College, and Scholars Day is a time to bring together the campus community to share our achievements," said chemistry professor Brad Sturgeon, part of the College's Student Activities and Support Committee, which helped organize the day. "At today's event there were more than 100 presentations, ranging from theatre student posters to a brain dissection and virtual reality."

As Monmouth President Clarence R. Wyatt said, the day is a celebration of the Monmouth mission.

"The combined power of thought and action is the heart of Monmouth College's distinctive experience in the liberating arts," Wyatt said during his remarks at the Honors Convocation, which was held in person in Dahl Chapel and Auditorium for the first time since 2019. "And it is that process of liberation that enables our students to approach the world, with all its challenges and opportunities, confidently, fearlessly."

Engineering professor John Iselin addressed that issue of confidence when listing the positives that come out working with a 3-D printer, one of the hands-on learning experiences that students demonstrated during the afternoon portion of Scholars Day.

"You can design things in two dimensions that you can't put together," said Iselin, who is another member of the organizing committee. "There's the issue of tolerance, such as how a one-inch pin might not fit into a one-inch hole. Working with a 3-D printer, the students learn a lot about visualization."

The engineering students learn not only to construct 3-D projects, but how to construct the 3-D printer itself.

"I buy a 3-D printer and have the students put it all together, very carefully following the instructions," he said. "It helps them gain some ownership of the program -- that the machine they're putting together is not just the administration's or the faculty's; it belongs to them, too. And it gives them the confidence that they can do it."

"The class is called 'Building Stories, Building Worlds,'" said Wright, who noted that students in recent years, perhaps influenced by the Harry Potter series, have enjoyed "living in a world that's not the one they're in."

So Wright had what he called his "exceptional group" of students create their own, and even assigned them to write a pair of chapters - one that's a reveal of the world they've created, and one with the conflict that will drive the story. When the students have completed the two chapters, they're well on their way to creating a larger work, if they so desire.

Larissa Pothoven '23 of Rock Island, Illinois, used the assignment to return to a story idea she first dabbled with as a high school student. Titled "Comidor," her work follows a character named Evelyn who becomes an assassin after witnessing the deaths of her parents. She was inspired by fantasy series such as Ranger's Apprentice and Ascendance, as well as by Pinterest prompts.

"Was (Evelyn) the hero, or was she the villain?" asks Pothoven of her readers.

Another student in Wright's class, Jan Abel '23 of Wataga, Illinois, jumped enthusiastically into the project, drawing maps of the world she created for her work, "Rusinya," and displaying other props, including a sword.

A poster promoting the various fictional works included the first lines written by each of the students, including the following by Michael Gonzalez '22 of Chicago: "A little early for an epitaph, and a little too late for final words."

During the Honors Convocation scores of students were recognized for their outstanding work in Monmouth's academic departments, including the art department, which for the first year awarded its Home Again Prize for a piece of art by a non-senior that best describes their interpretation of "home." The recipient was Charles Conkle '24 of Morton Grove, Illinois.

A few non-departmental awards were also presented, including two new ones: the Jacquelyn Condon Prize and the Echols Family Prize. The latter, presented to a traditionally underrepresented minority student who combines academic excellence with active involvement on campus, went to Jonathon Diaz '23 of Riverdale, Illinois. Corey Pevitz '23 of Naperville, Illinois, received the Condon Prize, awarded to a student with outstanding academic achievements who also demonstrates exceptional contributions to campus life.

Founded in 1853 and affiliated with the Presbyterian Church (U.S.A.), Monmouth College provides a transformative educational experience within a caring community of learners. A residential liberal arts college that is the birthplace of the women's fraternity movement, Monmouth College empowers students to realize their full potential, live meaningful lives, pursue successful careers, and shape their communities and the world through service and leadership. 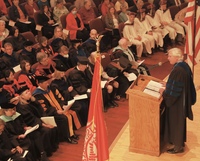 Monmouth College President Clarence R. Wyatt opens the College’s 2022 Honors Convocation ceremony, held Tuesday in Dahl Chapel and Auditorium. It was the first time the academic ceremony had been held in-person since 2019. 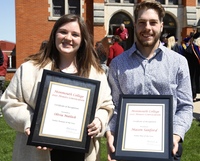 Courtney Fisher ’22 of Monmouth explains her research on “The Association Between Social Media Use and Disordered Body Change Behaviors in Adulthood” to psychology professor Joan Wertz Tuesday afternoon in the Huff Athletic Center during the College’s Scholars Day. 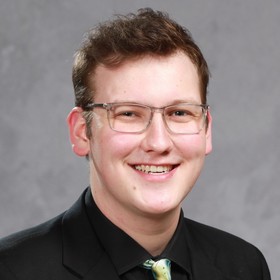 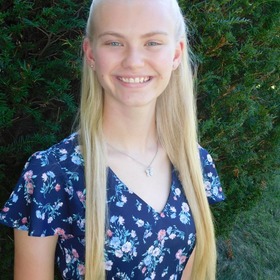