Monmouth, Ill. (06/15/2022) — Like several other Monmouth College students and members of the campus community, Lillian Hucke '24 of Aledo, Illinois, was looking forward to a College-sponsored trip to Italy at the end of the semester last fall. Ultimately, though, the pandemic won out.

"Originally, I was supposed to go on the winter Scots Term trip to Italy with the classics and art departments," said Hucke. "That trip was canceled due to the rapid increase of COVID-19 cases and the new variant of the coronavirus."

But Hucke still got to see the sights in Italy - including Venice, Florence and Rome - thanks to another College-sponsored trip in May. And, this time, it was even in her major.

Through the course "Cross-Cultural Psychology in Italy," 20 students made the trip to Italy May 17-26, earning academic credit on top of the wonderful learning experience.

"The idea behind the course was examining different cultures in the United States and Italy, such as differences in art, culture and religion," said psychology professor Carolyn Liesen, who led the trip along with department colleagues Joan Wertz and Ryan Colclasure. Monmouth Director of Global Engagement Christine Johnson was also part of the 29-member travel contingent.

"For students considering or even slightly thinking about going on a study-abroad trip, I would advise them to do it," said Hucke. "This was a once-in-a-lifetime trip. There are not many times where you have your trip completely planned, get course credit, and get to travel with your friends."

In terms of comparisons, "Italy is a much older culture than the United States," said Liesen, a point that was driven home repeatedly to Monmouth's students.

"Rome exceeded my expectations," said Hucke. "Being able to walk through the Colosseum and throw a coin into the Trevi Fountain not only blew my mind but also allowed me to better understand the importance of these monuments. Florence surprised me and was my favorite. Everything in Florence was so accessible and within a 10-20 minute walk."

"Being able to see parts of the world that are so historic - not only to Italy but to human history overall - helped me to gain a better perspective about the world and my own life," said Emma Wolfe '23 of Galesburg, Illinois, who had also been scheduled to go on the December trip to Italy.

The group first visited Venice, then headed to Florence. After a day trip to Assisi (the birthplace of St. Francis), the travelers completed their tour of Italy in Rome.

"They had to do daily journals, addressing various prompts, then write a formal paper upon their return," said Liesen, who noted that subjects covered in those papers included fashion and the idea of collectivism versus individualism.

"Every night, I wrote in my journal," said Hucke. "The prompts were fun because they allowed me to reflect upon my day and trip thus far, but they also pushed me to reflect critically about Italy's culture and my own."

The joy of cooking

Liesen had been abroad before, including to Italy, but many others in the group were in a foreign land for the first time.

"I was really excited to show the students what I love about Italy," said Liesen. "Many of them hadn't been outside the U.S. before, so we were exploring new experiences. I got a lot of joy out of their joy."

One of those joyful experiences was a three-hour cooking class.

"We learned how to make pasta from scratch, tomato-pepper sauce, bruschetta and tiramisu," said Wolfe. "I was so excited to eat real Italian pasta on the trip, but learning to make it was beyond anything I could have expected on the trip."

Even within Italy itself there were cross-cultural experiences, said Liesen.

"In Rome, there were so many instances of ancient structures standing right next to modern buildings. That juxtaposition was fascinating."

"I was amazed at how big and tall the buildings were in Italy," said Wolfe. "For buildings built such a long time ago, it was amazing to see what humans could accomplish without the technologies we have today."

It was Wolfe's first trip abroad, and now she's ready to go again and again.

"It was such a great experience being able to go with a group of people I knew and trusted for my first time traveling outside of the country," she said. "This trip helped me realize that other parts of the world, even though they may be far away, are not so different than where we live. I am now much more confident in myself and my travel capabilities, and I'm eager to go back to Europe to explore new places. It is kind of addicting - once you go and see one place, you want to see them all." 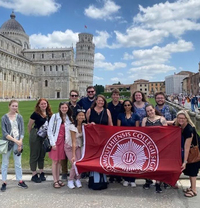 The Monmouth College group is pictured last month with the Leaning Tower of Pisa in the background.