MONMOUTH, Ill. (01/20/2022) — Monmouth College alum Jake Starkey already has his name all over the Fighting Scots baseball record books and now he's added the title of full-time assistant coach for his alma mater.

Starkey, a 2019 Monmouth College graduate, joined the staff in December. He worked as an assistant coach last season at Eastern Mennonite University in Harrisonburg, Virginia, working with hitters, outfielders and base runners. Prior to his season at EMU, Starkey was a volunteer coach from 2020-21 at Carson-Newman University in Jefferson City, Tennessee and a volunteer coach at Eureka College in 2019-20.

In four seasons at Monmouth, Starkey filled the stat sheets as a two-way player. He holds the Fighting Scots career records in at-bats (554), plate appearances (652) and saves (10). Starkey set the Monmouth single-season record for saves in 2018 with nine while posting a 0.82 ERA and 1.09 WHIP in 12 appearances. He was a Midwest Conference All-Conference selection and D3baseball.com All-Central Region Third Team selection in 2018 while also batting .349 as the Scots won the MWC title.

In his four-year Monmouth career, Starkey hit .301 with a .399 on-base percentage. He scored 112 runs and collected 167 hits in 167 career starts while adding 33 extra-base hits and 79 walks. Starkey led the team in stolen bases all four seasons and ranks third all-time with 49 steals. Starkey finished his Monmouth career in the top 20 in runs, hits, triples, total bases, walks, hit by pitch and tied the Scots record with two triples in one game on April 17, 2018.

A native of Morton, Illinois, Starkey graduated from Monmouth with a degree in Wellness Administration. He played for head coach Alan Betourne, also a Monmouth alum. The 2022 Fighting Scots baseball season starts with a spring break trip in Florida March 5-11 and the home opener is set for Saturday, March 19 with a double header against Dominican. 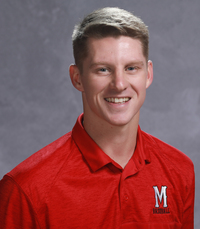