Titled "Emergence," her exhibition will run through Feb. 11. On that final day, there will be a reception for Wunderlich at 3 p.m. in the gallery. She will speak about her work at 3:30 p.m.

The exhibition, reception and talk are all free and open to the public. Masks are required inside Monmouth College buildings.

"This recent body of work is highly influenced by a wide array of creation narratives and the emergent themes of duality, fertility and reciprocity," said Wunderlich, who last year received the College's prestigious Hatch Award for Scholarship and Creative Work.

Wunderlich said that in general a family member's colorful, complex works were a major influence on her style, as well as her subject matter.

"I come from a storytelling tradition in my family," she said. "I have a lot of religious background, and I also grew up with a Cherokee grandfather," who was a folk artist. "I grew up with (Native American) imagery and constant stories streaming from him. ... I get a lot of influence from him. Probably him more than anyone else, because I grew up with his stories and his visualization. He spoke the Cherokee language as his native tongue, and he used it in many of his images. It's a very visual language and is very appealing to look at."

Wunderlich also showed slides of other works that have influenced her, going as far back as 25,000 B.C. to the Venus of Willendorf, which was discovered a century ago in Austria.

"She, to me, embodies what a creation story looks like if I were to figuratively create a creation story," said Wunderlich. "Her body, her womb ... it's just all out there. It's so amazing that it's so old and yet it's so relevant to our being here."

The Willendorf piece is just one example of how art history influences Wunderlich's creations. Another is a Hindu work that touches on the balance of fire and water - a balance present when Wunderlich does ceramics, her main artistic focus.

The Hindu gods, she said, "were creators and destroyers at the same time ... but then I realized how beautiful that whole thing is - that you could be all-encompassing and all in one and have that dualistic nature - that's the way life is. Water does destroy, but it also brings fertility and life. It's not really authentic to separate the two."

She continued: "We love to tell stories. We need myths. Even our early ancestors knew this. We operate under this structure of the need to make sense of the world around us - to understand birth and death. ... I get so much inspiration from art history."

Wunderlich was also influenced by the book Braiding Sweetgrass: Indigenous Wisdom, Scientific Knowledge and the Teachings of Plants by Robin Wall Kimmerer, a member of the Potawatomi nation.

She said she was inspired, both in her art and in her life, by a passage in the book about reciprocity: "Each person, human or no, is bound to every other in a reciprocal relationship. Just as all beings have a duty to me, I have a duty to them. If an animal gives its life to feed me, I am in turn bound to support its life."

Wunderlich has also brought the idea of reciprocity into her teaching, most recently overseeing work at a pair of downtown area businesses by students in Art Alliance, a College organization.

"I like this idea that you can flex your art powers to do good in the world," she said, before referencing another Kimmerer quotation:

"Our work and our joy is to pass along the gift and to trust that what we put out into the universe will always come back." 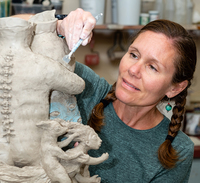