MONMOUTH, Ill. (01/19/2022) — Former Monmouth College All-American Kenzie Baker has been hired as a full-time Fighting Scots track and field assistant coach. Baker, a native of Aledo, Illinois, graduated from Monmouth in May 2021 and stared with the Scots in December.

Baker was an All-American in 2021 and her 24.38 time in the preliminaries of the 200m at the NCAA National Championships was not only a career-best, but also ranks as the third fastest time in school history. She also has Monmouth's fourth-best time in the 100m with a 12.16 at the 2021 Meet of Champions.

Baker was the 2021 Midwest Conference Southern Division Track Performer of the Year after winning the 100m, 200m and 4x400 relay at the MWC Southern Division meet, leading the Scots to a team title. Baker won the 100m at four meets in 2021, the 200m at six meets and was part of four relay teams that won meets with two in the 4x100 and two in the 4x400.

A 2017 graduate of Mercer County High School, Baker was named an Academic All-American by the USTFCCCA in 2021. She was won the Monmouth College Kim Mead Award, presented annually to a senior female who is an all-around student-athlete maintaining good academic standing, leadership and responsibility.

Prior to joining the Scots track and field staff, Baker worked as personal trainer after graduating with a degree in Exercise Science. Coach Baker lives on a farm in Aledo with her boyfriend Austin, raising show pigs and Dachshunds as their favorite hobbies. The SCots begin their track and field season on Friday, Jan, 21 with a meet at Illinois College. 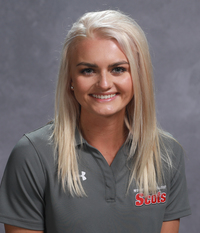