After a long career as a teacher and administrator in Keokuk, Iowa, Esther White came to Monmouth in 1974 as a professor in the education department. She intended to stay only a year or two but taught until 1988, preparing students to be the next generation of educators. She cited the relationships she built and the creation of Monmouth's summer enrichment program, College For Kids, as reasons why she stayed.

Among the last students she taught was Sandra Pragas '88, who returned to her native Malaysia and eventually started her own kindergarten. Traveling to Malaysia to help Pragas formally launch the school was one of White's career highlights and is a memory also treasured by Pragas, who keeps a photo of the occasion.

A pioneer for women administrators

"Among my first course subjects with Ms. White was 'Children's Literature' - a textbook that I still have in my library of books to keep for life," said Pragas. "In came this lady on the first day, with bright red lipstick and a big smile. She chuckled and introduced herself. She had me at hello. But that smile also came with a firmness and high expectations from her students."

Pragas recalled a rocky start in that class, receiving a D on White's first quiz, but she buckled down and eventually earned an A.

"She loved children's literature and had such a strong knowledge of it," said Sargent, a former special education teacher who is now a teacher of English language learners in the Galesburg school district. Her husband, Tom Sargent '85, is a Monmouth educational studies professor.

Sargent called White a "pioneer" for the administrative roles she held as a woman during the middle of the 20th century. She also called her the "epitome of an aunt," as she'd gotten to know her as a child through White's nephew, who was Crystal's neighbor in nearby Kirkwood.

"She was like the perfect aunt," she said. "She didn't have children of her own, so she really valued her family relationships."

Sargent said White influenced her career in education, and she thinks of her often, especially when she's writing on a whiteboard for a class and remembers the need for good penmanship, an aspect of teaching that White emphasized to her students.

As Pragas progressed through Monmouth's curriculum, she had the opportunity to travel to several conventions with White.

"May her beautiful soul rest in peace," said Pragas. "Her influence has remained with me and always will."

Pragas called the education department a "tight-knit" group, "very committed to going the extra mile for any student who knocked on their doors." Also on the faculty were George Arnold and the late Frank Sorensen.

"Esther was a caring and genuine person who related so well to students," said Arnold. "She had high standards and a great sense of humor. Frank and I always had fun teasing her, and she always took it in stride with a laugh. It's hard to imagine having a better colleague."

Also on the faculty during White's time at Monmouth was English professor Jeremy McNamara, who later came to know her better through a monthly dinner club that met for a number of years. Other regular attendees were two other longtime Monmouth faculty members, Dave Allison and Jim De Young.

"Three of us had been in the military, and we'd get going talking about our service," said McNamara. "Esther had a delightful way of sort of putting us big boys down and letting us know there were other things to talk about, like being raised on a farm. She always had very interesting stories to tell us about that. And, of course, she was very devoted to education. She was a fascinating woman to be around."

Born June 23, 1920, White grew up near the tiny community of Argyle, Iowa. She gave a great deal of credit for her longevity to her very rural upbringing, which included experiencing the Great Depression.

"Money was not a thing of any evidence," said White. "We did have a garden, so my diet was primarily food from the garden, and the fruit trees and the grapevines. I didn't know sugary drinks."

To get to school, she rode a horse-drawn bus, which stopped at her farm's one-lane dirt road. White not only attended a one-room schoolhouse but eventually taught in one, fulfilling a goal she'd had from a young age.

"The teachers had rings and necklaces and pretty new shoes," she said. "I thought they were wonderful. I think it might have been then that I decided I was going to be a teacher someday and have pretty things to wear."

A 16-year-old high school graduate, she took courses at Fort Madison Business College until she turned 18 and was old enough to teach in Iowa.

"All you needed at the time was 10 weeks of summer school to get your teaching certificate," she said. "You could go back each year and take another 10 weeks to get more certification."

White took her first 10-week set of classes in 1938 at nearby Iowa Wesleyan College, which qualified her to be a teacher at a one-room schoolhouse, where she made $50 a month. She went back each of the next four summers to get her full teacher's certification, then became a teacher for eight years - and then a principal - in nearby Keokuk.

During her 50 years in education - from being an 18-year-old teacher to the end of her college tenure, teaching methods evolved. For example, she said, fractions were taught "rote" when she first led a classroom.

"It wasn't the actual understanding of the concept," she said. "Now, we do lots more to identify the kids as slow learners, or learners who need more of a visual example. We do a lot more now with that type of thing."

But one element of her teaching remained a constant.

"I learned not to give up on a kid," she said. "Something positive about that kid will always come through."

During the early days of the pandemic, White's 100th birthday was celebrated with friends and former students and colleagues driving by her home near campus, while she sat outside and waved. A brief memoir she wrote for the occasion concluded with the following words:

"I wish to each of you a long life also and one surrounded by love and appreciation made evident by all of us. Only as we make our love evident does it add to our living." 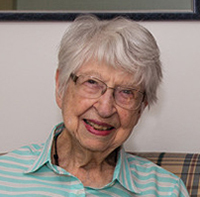