Monmouth, IL (03/20/2020) — Despite losing two days of work to stormy weather and the coronavirus, Monmouth College students were part of a group that picked up 47,000 pounds of trash from in and around Lake McKellar in Memphis, Tenn., during the College's spring break.

A year ago during spring break, Monmouth students assisted in an effort that removed almost 29,000 pounds of trash.

"Since this was my second trip down to Memphis, I was expecting a similar amount of trash as the previous year," said Liam Meyer '22 of Cedarburg, Wis., one of 31 of the College's Stockdale Fellows who made the trip to Memphis, led by Assistant Director of Leadership and Service Jake McLean. "I was very surprised by the amount of trash we were able to pull in just two days. It definitely hurts to see so much trash in one of the nation's most famous bodies of water nearly covered in trash, but I did enjoy seeing groups of students from across the nation come together to help."

The Monmouth group was joined in its efforts by students from Illinois State University, Texas A&M University and Carroll University. The students all worked together on March 9-10, then were forced off the lake by inclement weather for a day. In place of picking up trash, they attended an educational workshop about the group in charge of the cleanup, Living Lands and Waters.

"The educational day is what really had me thinking," said Ally Clay '23 of Jacksonville, Ill. "We got to hear more about their mission and see images of things they had found - for example, a bird with plastic filling its stomach. It's things like that that make you want to do even more than we already had. It's up to us to keep this Earth clean, and yes, I may have known that already, but being hands-on with all the trash just made it more real."

McLean said the student groups were greeted by the founder of Living Lands and Waters, Chad Pegracke, who was recognized in 2013 as CNN's Man of the Year for his efforts to clean up the Mississippi River and other U.S. waterways.

"Chad welcomed us the first couple days, but then with all the crazy coronavirus stuff, he had to take care of some things," said McLean. "But there was a crew from National Geographic there filming him and what his organization does, and we were there while some of that filming was happening."

The Monmouth students were slated to do one final day of cleanup on March 12, but they went home ahead of schedule due to coronavirus concerns, as did the students from ISU. The remaining students collected an additional 8,000 pounds of trash on the final day to produce the 47,000-pound total.

"It was different from last year, when we could just lean out of the boat and collects tons of trash," said McLean. "The lake was less flooded, so we were able to get into some of the islands on the lake and do more work along the shore. We saw piles and piles of trash. The most common thing was bunched up Styrofoam containers, and not little containers, either - cooler-size Styrofoam containers. The other thing we saw a lot of was single-use plastic bottles. I can't tell you how many bags of those we collected."

"Being a first-year student on this trip, I really was not sure what to expect, but the amount of trash we picked up, just in the first day even (22,000 pounds), was really impactful," said Clay.

While cleaning the lake was a primary purpose of the trip, bringing the Stockdale Fellows closer together was also an objective. Overseen by McLean, the program is the most prestigious scholarship, leadership and enrichment program at Monmouth College.

"One key thing I learned is that bonding can happen anywhere," said Meyer. "Service trips like these allow for students to get close with each other early on and allow them to come back to campus knowing their colleagues and motivated to create change."

"I loved getting to know everyone better, knowing we were all doing such a great thing by cleaning up the river," said Clay.

Thirty-one Monmouth College Stockdale Fellows were part of a group of students from four colleges who removed 47,000 pounds of trash from the Lake McKellar area of Memphis, Tenn., over a four-day period from March 9-12. 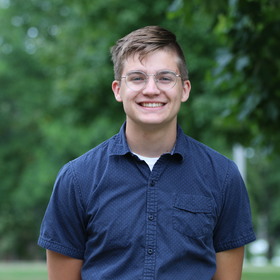