MONMOUTH, Ill. (04/30/2022) — The Monmouth College baseball team was eliminated from Midwest Conference tournament contention on Saturday as they were swept at home by Illinois College 13-4 and 6-3. The Scots, 7-15 in MWC play, honored nine seniors before the double header as part of Senior Day festivities.

The Blue Boys grabbed a 3-0 lead in the top of the first inning. Two singles and a sacrifice fly made it 1-0 before a home run gave IC a 3-0 lead against Addison Fletcher (Monmouth, Illinois).

The Scots responded immediately in their half of the first. Logan Komater (Ottawa, Illinois) walked and went to third on a single by Nate Melvin (Ottawa, Illinois). Tyler Houck (Park Ridge, Illinois) was hit by a pitch to load the bases and IC got the first out of the inning at the plate on a fielder's choice. After a strikeout, Raul Guillermo (Miami, Florida) singled home two runs to get the Scots on the board, down 3-2.

Illinois College added to their lead with a triple and a double in the third to lead 4-2. The Scots got that run back in the bottom of the inning. Melvin singled and went to second on a groundout. Bost singled to put runners on the corners and a sacrifice fly from Jack Kuethe (Pekin, Illinois) got the Scots back within one.

The Blue Boys got another 3-run homer in the fourth inning and took an 8-3 lead. They plated another run against reliever Hunter de la Rosa (Moline, Illinois) in the seventh to go on top 9-3. Monmouth got on the board again in the seventh. Jackson Van Iwaarden (Ballwin, Missouri) led off with a walk and moved to second on a groundout. Komater singled to center, cutting the IC lead to 9-4.

Illinois College scored four more runs in the ninth against seniors Matthew Datlof (Las Vegas, Nevada) and Eli Herrera (Romeoville, Illinois). The Scots didn't get a run in the ninth and lost 13-4.

Monmouth scored first in game two with a run in the bottom of the first innings. Houck was hit by a pitch with two outs and he moved to third on a single by Bost. A wild pitch scored Houck for a 1-0 lead before a strikeout ended the inning.

Senior starting pitcher A.J. Hatlestad (New Windsor, Illinois) cruised through the first five innings and the Scots added on bottom five. Anthony Ruggles (Aledo, Illinois) was hit by a pitch with one out and Komater singled. With runners on the corners, Melvin gave Monmouth a 2-0 lead with a sacrifice fly to deep right.

The Blue Boys took a 3-2 lead in the seventh after the Scots had three errors in the inning, plus a wild pitch. Monmouth loaded the bases with one out in the bottom of the inning but didn't score as a pop up and fielder's choice ended the inning.

The Blue Boys scored two more in the eighth on a pair of singles, a hit batter and a two-run single and a run in the ninth on an error and a sacrifice fly. Monmouth got the final run of the game in the bottom of the ninth on a RBI groundout by Melvin.

The teams will play at Noon on Sunday in Jacksonville. Monmouth also has a MWC game to make up on Tuesday afternoon at the University of Chicago, 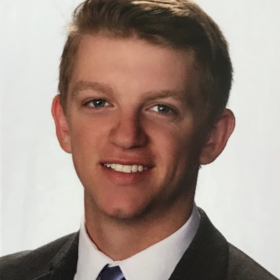