Monmouth, Ill. (11/22/2022) — "Depending on whom you trust, cryptocurrencies and the products they make possible are either 'the future of consumer engagement' or 'rat poison squared'; either the next evolution of digital finance or a waste of everyone's precious time." - The Ringer's Katie Baker

At Monmouth College, a trusted voice on finance is professor Mike Connell, chair of the business and economics department.

At a Monmouth Associates talk earlier this month, where Connell gave a "30,000-foot view" titled "Bitcoin for Dummies," his answer to whether bitcoin and other cryptocurrencies are "the future of consumer engagement" comes down to three little words: "No one knows."

"I'm not an expert on cryptocurrency, but I do know some things about money and how money works," said Connell, who joined Monmouth's faculty in 1992 and holds a law degree and a doctorate from the University of Illinois. "Money is one of our most important inventions ever. It greases the wheels of commerce. It makes it easier to buy and sell things."

Money shouldn't only be viewed as a paper banknote or a metal coin.

"In prison, a cigarette is money," said Connell. "But in reality, less than 1% of the transactions in the U.S. involves cash, or government-issued 'public money.' More than 99% is what is called 'private money' - things like checks, debit cards and Venmo."'

Money, said Connell, is also a language of its own, fulfilling the "unit of account" requirement of what he called "the three functions of money."

The other two functions, said Connell, are serving as "a medium of exchange and a store of value."

"Anything that serves these three functions can be money," he said.

In the short term, said Connell, the news for bitcoin is good.

Whether it will continue to work, he said, comes down to another single word.

With a heavy emphasis on his first word, Connell said, "Some people have faith in bitcoin, while the rest of us just go along with it. Some of that faith is wavering."

Connell offered some figures to support that statement. Over the past couple years, he has given his talk on bitcoin several times. He noted that the value of a unit of bitcoin was $68,000 a year ago but fell to $43,000 last March, then to $28,000 in May and to $16,550 earlier this month.

Bitcoin is similar in that regard, said Connell, to what farmers experience with the price of a head of cattle or a bushel of corn.

The importance of blockchain

"The people who believe in bitcoin buy it and sell it and zap it to each other on their computers," said Connell. "For some people, it is a currency. In most countries, it's not legal tender, but it is in El Salvador. If you pay with bitcoin there, the buyer is legally obligated to accept it."

Behind the computer zapping to which Connell referred is blockchain technology, which means that every one of the 21 million units of bitcoin that will be mined by 2040 can be fully tracked, from where they were created to where they've been ever since then.

"And that record is on thousands of independent computers," said Connell of the tool, which is separate from bitcoin. "Actually, the development of blockchain will probably turn out to be more important than bitcoin. For example, wouldn't it be great to have blockchain technology applied to medicine? Many of us use OSF's 'MyChart,' which has some of your medical history on it. With blockchain, our entire life's medical history would follow us everywhere. It would always be with us and easily accessible, just like the history of a unit of bitcoin."

In short, said Connell, it is important to not only understand what cryptocurrency is - or isn't - but also about money, itself.

"Money is like gravity," he said. "Even if you don't understand the theory behind it, it is a big part of everyone's life. And if you don't pay attention, you'll end up flat on your face."

Connell didn't give a firm thumbs up or thumbs down to bitcoin and cryptocurrency, but he did offer a hint about his opinion in his closing statement: "Bitcoin is a utopian venture by true believers. The world has seen many utopian ventures. Most utopian ventures fail." 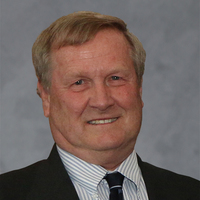