With snow on the field in Wauwatosa, Wisconsin, both teams punted on their first drive. All-Conference punter Addison Fletcher (Monmouth, Illinois) blasted his first punt over 50 yards to pin CUW inside the 10=yard line. The Falcons fumbled on third down but recovered on their own 12 before punting for a second time. Monmouth blocked the punt but touched the ball beyond the line of scrimmage and couldn't corral the ball as CUW recovered the ball for a new set of downs.

The Monmouth defense held strong and forced another punt. The Scots took over on their own 46 and moved across the 50 with a completion from Carter Boyer (Carthage, Illinois) to Nathan Thornton (Peoria, Illinois). After a holding penalty, the Scots punted again with Fletcher getting the ball inside the 20. The Falcons got a nice pass play on first down but then Korbyn Personett (Pittsfield, Illinois) got in the backfield on two straight plays to wreck the Falcons drive.

The Scots got going on offense with a long pass play to Thornton and then an offsides penalty put Monmouth in the red zone. Lawrence scored from 12 yards out and Cody Szelc (Riverview, Florida) hit the extra point for a 7-0 lead. The Falcons got a first down on a pass interference before fumbling a snap. On 3rd and 20, Personett hit the quarterback's arm and forced an incompletion. Tevin Baker (Kewanee, Illinois) blocked the punt, picked up the ball at the 30 and ran it all the way in for a touchdown. Szelc's extra point gave the Scots a 14-0 lead at the end of the first quarter.

The Falcons moved the ball down inside the Monmouth 20 and faced 4th and 6. They threw for the end zone but Jalen WIlliams (Lakeland, Florida) picked off the pass on the goal line and returned it to the CUW 35. Boyer hit Jake Uryasz (Farmington, Illinois) down inside the five and the duo connected two plays later for a touchdown and a 21-0 lead. The Falcons moved the ball down the field on their next drive with a pass interference penalty aiding their efforts. With 7:15 to play in the half, they got a passing touchdown to cut the Scots lead to 21-7.

Boyer hit Brendon Bishop (Sherman, Illinois) and Uryasz for completions on the next drive, the latter play moving the Scots into CUW territory. Lawrence took the ball right and weaved through CUW defenders for a 31-yard touchdown run and Szelc made it 28-7 with the extra point. The Scots ended the next CUW drive with another interception as Jaylan Peeler (Grandview, Missouri) picked off a pass on the sideline deep in Monmouth territory. The Scots had to punt from their own end zone but CUW turned it over on downs with 1:45 left in the half. Lawrence picked up two first downs on the ground and the Scots called timeout in CUW territory with 18 seconds left in the half. Boyer hit Uryasz for 44 yards down to the CUW five.

The Scots got the ball to start the second half. Boyer hit Thornton for a 44-yard pass down to the CUW 23 and Lawrence moved the ball inside the 20. A pass to Jackson Bergren (Monmouth, Illinois) moved the Scots inside the five but the drive stalled and Szlec nailed a 21-yard field goal for a 38-7 lead.

The Falcons scored on their first possession of the half and forced a Monmouth punt. The Falcons moved down to the Monmouth red zone but the Scots defense held on fourth down and took over on their own 10-yard line late in the third quarter. After a first down completion to Uryasz, CUW got an interception on a deflection. The Falcons scored to cut the Monmouth lead to 38-20 but Tanner Tomaschke (Greenville, Illinois) broke up the trick-play 2-point conversion with 3:26 left in the third quarter.

The Scots used the ground game on the next drive as Boyer ran for nine, Lawrence ran for 10 to go over 100 yards on the day, and McKade Brooks (Astoria, Illinois) got inside the 35. But the Scots turned it over on downs on the 30 with an incomplete pass in the end zone on fourth down. The Falcons used a fake punt to run for 30 yards on the next drive as the fourth quarter began. However, they fumbled inside the red zone and the Scots recovered.

With the snow coming down, Monmouth had to punt the ball away but the Falcons fumbled again, this time before crossing the 50. Lawrence ran the ball to the CUW 35 and scored two plays later, his third rushing touchdown of the game. Szelc's extra point gave the Scots a 45-20 lead with 9:09 to play.

Anthony Cikauskas (Oswego, Illinois) got a 15-yard sack on the next dive, after the Falcons got into the red zone. On fourth down, Tyler Geary (New Port Richey, Florida) recorded a sack to give the ball back to the Scots on their own 42. Monmouth picked up a first down with two runs and then worked the ball down to the CUW red zone. From there, the Scots went into victory formation, taking a knee to run out the clock.

Lawrence was named the Lakefront Bowl MVP with three rushing touchdowns. The Scots finished the season at 9-2. A full box score was not available at time of posting. 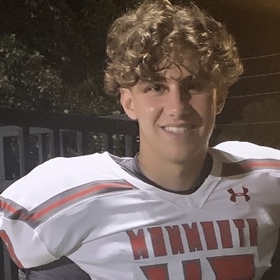