The Scots open the 2021 campaign at Wisconsin-Whitewater on Sunday, September 5 at 3 p.m. The Warhawks made it to the 2019 NCAA Division III National Tournament and are 1-0 all-time against the Scots with a 1-0 win in 2016.

The home opener is slated for Tuesday, September 7 as the Scots welcome Principia to Peacock Field for a 5 p.m. kickoff. The Panthers also made the 2019 NCAA Tournament are 9-1 against the Scots with the most recent matchup coming in 2017.

The Scots head to Dubuque, Iowa for a 1 p.m. game against Loras on Sunday, September 12. Monmouth is 1-2 all-time against the Duhawks and the teams have not met since 3007.

A two-game road trip continues on Wednesday, September 15 as the Scots play at Coe in Cedar Rapids, Iowa. Monmouth beat Coe 3-0 on September 24, 2019 and are 13-26-5 all-time against the Kohawks.

Monmouth returns home for two weekend games on September 17-18. On Friday at 2 p.m. they host the Buena Vista Beavers in a double header with the women's team. The Scots and Beavers have never met.

The Scots head to Rock Island on Wednesday, September 22 for a 7:30 p.m. kickoff against Augustana. The Scots beat the Vikings 3-1 in the most recent matchup in 2016 for their third win in 21 matchups.

The first conference game is a Saturday afternoon home game against Cornell on September 25 with a 1:30 p.m. start. The Scots and Rams played to a 0-0 draw on October 5, 2019 and Monmouth leads the all-time series 30-20-7.

The final non-conference game will take place in Bloomington, Illinois on Tuesday, September 28 as the Scots travel to face Illinois Wesleyan. Monmouth beat the Titans 2-1 in 2018 and are 5-11-4 in the series.

The Monmouth-Knox rivalry game will be played at Peacock Field on Tuesday, October 5 at 4:30 p.m. In 2019 the Prairie Fire beat the Scots 2-0 in the regular season and by the same score in the MWC Tournament. The Scots are 19-35-4 in the series.

A third straight road game sees the Scots head to Jacksonville on Wednesday October 20 for a 4:30 p.m. tilt against Illinois College. The Scots beat the BlueBoys 1-0 in 2019 and lead the all-time series 23-14-6.

The final home game of the season is a Homecoming day tilt against Beloit. The Scots and Buccaneers kick off at 1:30 p.m. at Peacock Field. Monmouth won the 2019 matchup 2-1 but Beloit leads the series 15-7-3.

The Scots went 9-7-2 in 2019 with a 4-3-2 MWC record. The nine wins are tied for the second most in school history and the Scots made the MWC Tournament for the first time since 2001. They set a program record for single-season lowest goals against average. Defender Jaxon Coleman (Washington, Illinois) was named MWC Newcomer of the Year while head coach Kooten Johnson was named MWC Coach of the Year.

Johnson left for Purdue-Fort Wayne after seven seasons in charge. The Scots hired Hateli in May 2020 and he is the 13th head coach in program history. A four-year starter at Millikin University, Hateli played in 62 collegiate games with 56 starts. The Brownsburg, Indiana native began his coaching career at the NJCAA level with East Central College. After two seasons he moved on to Wabash College where he served as an assistant coach for the last five seasons.

The Scots graduated three seniors in May with Alvaro Alvarez (Madrid, Spain), Jarrod Hall (Perth, Australia) and Kieren Marshall (Melbourne, Australia) earning their degrees. Alvarez led the Scots in 2019 with 10 goals while Marshall made 10 starts in goal, allowing 11 goals and making 48 saves. With the departure of the 2019 class the Scots return just eight of their 33 goals from 2019.

Marcos Garibay (Waukegan, Illinois) started eight games in goal as a freshman in 2019 with 12 goals allowed and 36 saves. He earned seven wins and was part of three shutouts.

There will be more than 10 newcomers on the Scots team when the season starts in Whitewater. This year's seven-player freshmen class have yet to make their college debuts and they will be joined by Hateli's first full recruiting class in the fall. 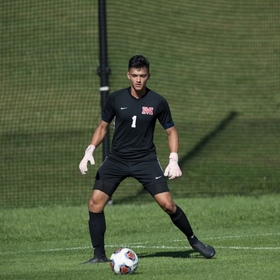