Monmouth, Ill. (04/05/2021) — When a mass shooting targeting Asian women occurred last month in Atlanta, members of the Monmouth College Diversity, Equity and Inclusion Group reacted by organizing a roundtable discussion that was held via Zoom.

"We should not ignore this crime," said faculty member Jennifer Thorndike, the event's moderator. "This panel is an opportunity to learn, to reflect and to act. May your voices help to build a more inclusive society."

When it comes to changing preconceived notions and stereotypes, part of the action that individuals can take is to "get yourself out of your comfort zone and do different things," said Damian, who coordinates the College's Asian studies minor.

Damian said she applied that advice to her own life when she began traveling to Japan.

"But even if you can't travel overseas - especially during the pandemic - you can do other things," she said. "If you're from a small town, go to a big city. If you're from the East Coast, go to the West Coast. Otherwise, the things you see in your daily life are just being reinforced day after day. You can also ask yourself, 'Do I think this way because this is what I really think, or is it just because that's what everybody around me thinks?'"

'When you see something, say something'

One way to help Monmouth students get out of their comfort zone is to provide study-abroad experiences, and they were told during the discussion that those opportunities will return next fall as travel restrictions are loosened around the world.

Damian also added to a reply by Srivastava, who told a student "When you see something, say something," is a way to show others some actions are "not what our country stands for."

"My grandfather is a sweet, wonderful man, but one day he asked me, 'Do you speak that Jap talk yet?'" said Damian. "I told him, 'We don't use that term these days. Here's what we say now.' These discussions can happen. They can be the hardest to have with people you care about."

Added Srivastava: "These are the people we want to bring in. Take a step back and have that conversation."

"Ask yourself, 'Are we really in need of using this as an identifier?'" she said. "Make a conscious decision."

Srivastava said that even applies to questionnaires in which people are asked to check a box for their racial identity.

"Why are we asking that question?" said Srivastava. "Do we really need it? Is something really being done with that data?"

Srivastava teaches communication studies, and she's used real-life situations to help her students understand how racial and ethnic tensions can be amplified.

"When the president of the leading democracy in the world calls COVID the 'Chinese virus,' it's not very helpful," she said. "But even incorrect news gets repeated. The damage was done. It's a communication nightmare, and that's something I talk about with my classes."

Damian and Li shared some of the "deeply rooted" history of how the Japanese and Chinese have been treated in America, discussing, among other legislation and incidents, the Page Act of 1875, which effectively prohibited the entry of Chinese women into the United States, and the Chinese Exclusion Act of 1882, which had the same effect on Chinese men.

"There was a sexual stereotyping of Asian women," said Li of the Page Act. "They had to prove they were not prostitutes. When things like this happen, Asian women are being seen as objects as opposed to human beings."

"When the president used 'Kung Flu,' it really gave permission for that history to re-emerge," said Li. "It made me think that being Chinese is my original sin, because the virus did originate in Wuhan, China. But that kind of talk just gave permission and justification to create motivation for people to do something crazy." 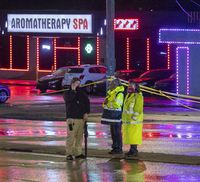 Monmouth College's Diversity, Equity and Inclusion Group quickly spring into action to hold an April 1 panel discussion in response to the March 16 shooting in Atlanta that targeted Asian women.