Monmouth, Ill. (04/28/2022) — It's been a busy spring for Monmouth College students as they have presented their research from San Diego to Atlanta, as well as on their own campus.

The latter students were part of the 47th annual ILLOWA Undergraduate Psychology Research Conference, which the College hosted in April. Ten Monmouth students participated in the event, the longest-running undergraduate psychology research conference in America.

Among the topics addressed by Monmouth students at the ILLOWA conference were social media and its effects on disordered eating; body image perception; stress intervention; and attachment style.

"This was a great opportunity for our students to experience what attending a psychology conference is like for the academic community, all in the comfort of Monmouth College," said psychology professor Carolyn Liesen.

"We know from Association of American College and Universities studies that undergraduate research is a 'high-impact practice' which helps make students' studies concrete for them, and leads to even better outcomes academically and in their careers," said Monmouth Vice President for Academic Affairs Mark Willhardt. "That we're able to take students to national conferences and support their presentations and participation means we're broadening how they see themselves as students and as developing professionals."

Political science professor Andre Audette praised "the culture of Monmouth College," and how it nurtures such experiences.

"This is a place where you can learn new things, where you can experiment and even do things outside your discipline," said Audette. "Grant is a computer science major, but he's working on political science research. Matt wants to go to law school, but he was able to tie in elements of history, economics, business and some of the other classes that he's taken."

Audette said Datlof's work developed out of his interest in religious liberty cases.

"One thing I find especially admirable about his research is that he took this idea and ran with it," said Audette. "He looked at a bunch of different cases, and even through his presentation, I think it was very obvious the impressive wealth of knowledge that he has about these constitutional law cases. I think that will serve him well, especially in law school," which Datlof will attend at the University of Nevada-Las Vegas.

Datlof and Miller did research well beyond their years, said Audette.

"Both of the presentations were very well-received," he said. "They received a lot of kudos for the ambitious work they're doing, especially at the undergraduate level. That was recognized by a lot of people within these fields who are experts in these fields."

"Addi, Kylie, and Carrie presented careful, thoughtful analyses that are much more sophisticated than would have been expected of undergraduates even 10 years ago," said Belschner. "Their analyses of A Midsummer Night's Dream and Twelfth Night incorporate close reading and creative uses of literary theories on gender and on trauma. While the students were presenting essays from a recent Shakespeare class, the impressiveness of their intellectual contributions reflects their work and dedication during their entire time at Monmouth."

"The conference taught me how to interact with other authors, especially intellectually and professionally," she told The Courier, Monmouth's student newspaper. "It was a great opportunity to learn how to make connections and ask and answer questions about my writing and other people's. I learned a ton more than I expected about how to navigate within the English sphere professionally and how those skills can be applied. I also got a super long reading list."

The trip to San Diego was made possible, in part, by an estate gift from the late Monmouth chemistry professor Richard "Doc" Kieft.

"Doc's endowment helps students pay for college, then engage in summer research and now present that work to a national audience," said Brad Sturgeon, one of two Monmouth chemistry professors who accompanied the students to California. "Our attendance at the ACS meeting is a culmination of year-long student research and is the final step in Doc's vision."

"Being able to present at the ACS conference validated my research, which I have spent countless hours perfecting," said Gabriela Peterson '23 of Southwick, Massachusetts. "For four days, I learned about chemistry research, advancements in chemistry and what scientists can do to improve chemistry through methodology and expanded education." 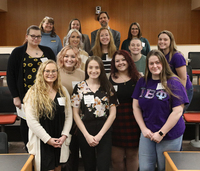 Monmouth College psychology students and faculty who participated in this spring's ILLOWA Undergraduate Psychology Research Conference, which was hosted on campus, include, in front, from left: Kayla Anderson, Courtney Fisher and Ashling Staunton. In the second row are Kendall Burt and Madison Vinyard. In the third row are Hailey Beeler, Morgan Kath, Hannah Jones, Kayle Heumann and Kaitlyn Fox. In the back row are professors Joan Wertz, Sydney Greenwalt, Ryan Colclasure and Caolyn Liesen. 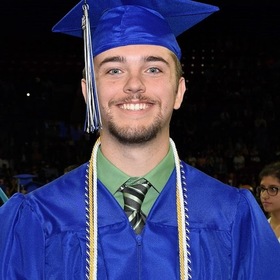