Monmouth, Ill. (04/07/2021) — Audiences attending Monmouth College's April 15-18 production of the musical Little Women - based on the novels written a century and a half ago by Louisa May Alcott - will be given a visual reminder of the passion of its main character, Jo March.

In the first act, Jo exclaims "I've got a fire in me!"

"In this concise and cogent line of dialogue, Jo March - the young, ambitious, creative, female pro-tagonist - unabashedly articulates what audiences have already discerned about her," said Campagna. "The motif of fire symbolizes Jo's passion for the craft of writing, her yearning to become 'a world-renowned writer,' and her desire to support her family with the 'barrels of money' her publications will earn. ... Jo's resiliency is fundamental to the character, and it functions as the linchpin of my direc-torial concept, the essence of which is captured by the candles that never extinguish."

Campagna said that Alcott's Little Women novels, published in two parts in 1868 and 1869, have been described as "timeless" for several reasons, including categorization as a "coming-of-age" story and the narrative's "feminist underpinnings."

"I wish to extend these insights by asserting that the story's perenniality can also be attributed to the fact that the Jo Marches of the world - the brave souls, the trailblazers, the creatives - have been, are, and will remain vital," she said.

There is even an element of timelessness when one compares the throes of the Civil War, during which Alcott's work takes place, to modern times.

"When Amy, the youngest of the four March sisters, laments a Christmas without money for presents, I am reminded of our not-so-distant holiday season (during the pandemic) and the trials faced by individuals and families as unemployment numbers increased while salaries and benefits decreased," said Campagna. "Jo bolsters Amy's spirits and rhetorically challenges her sisters, all of whom are dispirited: 'When have we let anything defeat us?'"

Campagna pointed to that line as an example of what prominent stage director Anne Bogart meant when she proposed that "a great play asks big questions that endure through time."

"I believe that Jo's question of her sisters is the foremost question of Little Women," said Campagna. "I also believe that her question is central to our lives. The musical does not diminish the significance of life's tribulations, and neither does it delude audiences with the suggestion that our circumstances will be righted on our preferred terms. Yet, it does offer the invaluable reminder that we will prevail. ... My sincerest wish for the students and colleagues who contributed to this project is that the fire within them be kindled, and especially in moments of perceived defeat."

Those working on the project include four Monmouth students playing the roles of sisters Jo, Amy, Meg and Beth March. They are, respectively, Grace Cornelius '24 of Warrenville, Illinois; Kylie McDonald '23 of Galesburg, Illinois; Gabriela Madu '23 of Montego Bay, Jamaica; and Allie Bryan '22 of Abingdon, Illinois. Kenny Broge '22 of Lena, Illinois, plays the role of Professor Bhaer.

Monmouth College's production of the 2005 Broadway musical "Little Women will be presented at 7:30 p.m. April 15-17 and at 2 p.m. April 18 at Wells Theater on campus. Tickets and online passes are $10 for adults, $8 for seniors and Monmouth faculty and staff, and $6 for Monmouth students. Ticket information is available at monmouthcollege.edu/theatre. 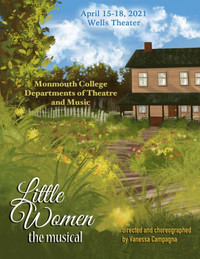 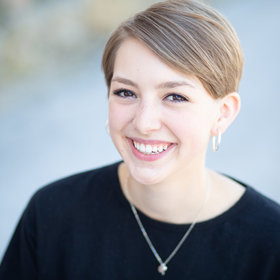