The 29-match season starts at home on Sept. 1

MONMOUTH, Ill, (06/14/2021) — The last time the Monmouth College volleyball team took the court was on November 2, 2019. The 2021 squad will have plenty of new faces as they a 29-match schedule that starts on Wednesday, September 1 and includes nine home matches.

The schedule will start with a home game on Wednesday, September 1 against Lincoln Christian at 7:00 p.m. The match will be the first event in Glennie Gym since February 2020 and the Scots first home volleyball game since October 27, 2019. The Scots are 13-14 all-time against LCU including a 3-1 win in 2019.

A week later the Scots will host Eureka College. Monmouth swept the Red Devils twice in 2019 and are 45-15 all-time in the series. The Wednesday games continue on September 15 with another home match against Augustana College. The Scots lost 3-1 to the Vikings in 2019 and are 25-30 all-time.

Midwest Conference play starts on Friday, September 24 with a group to Grinnell. The Pioneers won the MWC in 2019 and lost in the first round of the NCAA Tournament. Monmouth leads the all-time series 47-20 but lost at home to Grinnell 3-2 in 2019.

The Scots stay in Iowa for a Saturday afternoon match at Cornell on September 25. The Rams won the 2019 matchup 3-1 but Monmouth leads the series 33-28.

A fourth straight road game takes place on Friday, October 8 with a trip to Illinois College. The Lady Blues swept Monmouth in 2019 and lead the series 31-26.

The Scots return home for a non-conference game against Webster on Saturday, October 9 at 11 a.m. Monmouth is 3-3 all-time against the Gorlocks.

Monmouth hosts rival Knox College on Wednesday, October 13 at 7 p.m. The Scots won 3-2 in Galesburg in 2019 and are 66-21 historically against the Prairie Fire.

Monmouth heads to Carlinville, Illinois for a Tuesday, October 19 match against Blackburn. The non-conference matchup is one of three meetings between the Sots and Beavers in 2021 and Monmouth leads the all-time series 3-0.

The Scots return home for conference play on October 22 with a Friday night match against Lawrence. The Scots swept the Vikings in 2019 and leads the series 19-10.

The volleyball team will have a home game during Homecoming Weekend this year with a 11:30 a.m. start against Ripon on Saturday, October 23. The Scots are 16-14 all-time against the Red Hawks including a 3-2 win in 2019.

The Scots head to Loras College to face the DuHawks on Tuesday, October 26. Monmouth is 3-12 against Loras all-time. The regular season will end October 29-30 at the Central College Tournament.

The Scots need to replace four of their usual starters from the 2019 season after having two graduating classes since the last match. Returning to the lineup are middle blocker Megan Gilstrap (Farmington, Illinois) and outside hitter Loryn Beal (Pontiac, Illinois). Gilstrap started 21 matches and played in 27 back in 2019. She finished second on the team with 58 blocks while ranking fourth in kills (154) and points (189). Beal started 19 matches and played in 28 two seasons ago. She ranked second on the team with 360 digs, third in aces (29), fourth in assists (23) and fifth in both kills (114) and points (151).

Setter Karlie Drish (Milan, Illinois) participated in 29 sets over 11 games and ranked second on the team with 104 assists. Opposite hitter Amanda Dybal (Apex, North Carolina) started one game in 2019 while playing 11 sets and finishing with nine kills. Outside hitter Madi Fellhauer (Jacksonville, Illinois) logged four points in four matches with three kills and one ace.

Head coach Emily Thebeau starts her second season in charge of the Monmouth program. In 2019 she led the Scots to a 12-16 record and a 4-5 Midwest Conference mark. The 2019 season was her first in charge after the retirement of Kari Shimmin who won 337 matches in 21 seasons. The Scots last played in the Midwest Conference Tournament in 2012 and last won a MWC tournament game in 2007. 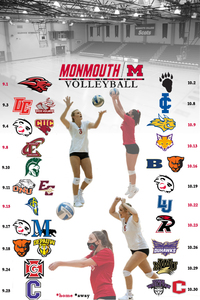 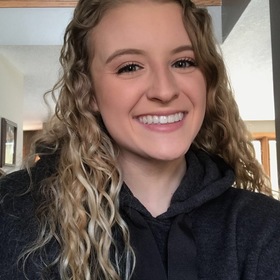