Monmouth, Ill. (07/25/2022) — Monmouth College student Alex Boswell '23 of Dixon, Illinois, had his eyes opened recently by a research opportunity at the College.

Boswell is among 10 Monmouth students who are conducting "graduate-level" research this summer as a Doc Kieft research fellow.

"It's really opening my eyes that grad school is attainable," said Boswell, a first-generation college student.

The Monmouth students have the research opportunity thanks to an estate gift from chemistry professor Richard "Doc" Kieft, established at the time of his death in 2009. It is a gift that keeps on giving, as it makes it possible for students to attend Monmouth, to conduct research, and to present that research at conferences.

The middle part of that formula - conducting research - was celebrated last week as the 10 Monmouth students took part in the Doc Kieft Summer 2022 Undergraduate Research Talks. Mostly rising juniors, the students were each given 20 minutes to discuss the research they've conducted over the past eight weeks.

Through PowerPoint presentations, the students walked the audience through the steps of experiments that could hopefully lead to medical breakthroughs, including ways to control or prevent degenerative diseases such as Parkinson's and Alzheimer's.

Some of the students had also participated in a question-and-answer session in June with Monmouth's "Golden Scots," alumni who graduated 45 years ago or more.

"Every student in our department does research," Audra Goach told College alumni that day. Goach joined the chemistry faculty in 2006, the same year Kieft ended his 31-year full-time teaching career at Monmouth. "They have to do research to get a degree. The projects we're doing this summer are graduate school-level projects."

Boswell is one of four students who took part in a new project developed by professors Brad Sturgeon and Laura Moore. Together, the students are looking into various chemical aspects of underwater environments.

"Brad and are I working on method development," said Moore. "We don't necessarily have all the results yet. In many respects, we know just a little bit more than the students do."

The students and faculty are looking forward to investigating underwater environments further, including a planned trip next January to the Bahamas to study blue holes, also known as cenotes.

"I just started research with Brad this summer," said Boswell. "I find blue holes to be extremely interesting. Brad really got me into them."

A tool that Boswell used this summer that will also make the trip to the Bahamas is an underwater drone. He called the College's Fifish V6 Drone, "a beautiful piece of equipment. It was really fun to play with."

Two other students - Isabella Peetz '23 of Geneva, Wisconsin, and Luis Castillo '24 of Chicago - worked in the lab of biology professor Janet Ugolino, who is co-coordinator of the College's neuroscience program.

"My students will be discussing C. elegans, the world's best organism, and how we use it to study degenerative diseases," said Ugolino.

Sophia Swift '24 of Colona, Illinois, worked in the lab of chemistry professor Michael Prinsell. She hoped to discover potential therapeutic effects on Alzheimer's.

"I'd never done research, and I was nervous to do it," said Swift, who said her interest in Alzheimer's stemmed from working 18 months at Senior Star in the Quad Cities as a caregiver in the memory care unit. "But I'm glad I did. I learned a lot."

Goach said the intensive research experience Monmouth students get in the summer puts them ahead of the curve when it comes time to head to graduate school.

"I went to visit (recent Monmouth graduate) Seth (Croslow) in his lab at the University of Illinois, and someone there said to me, 'Send us more of these students, please,'" Goach told the Golden Scots.

Also present at the Golden Scots presentation was Gabriela Peterson '23 of Southwick, Massachusetts. A former Kieft summer research student, Peterson spoke to the other two aspects of Kieft's estate gift - scholarships and travel to conferences.

"The Doc Kieft Scholarship made Monmouth affordable, much more so than the New England schools I applied to," she said.

Of her time at last spring's American Chemical Society Spring 2022 Experience in San Diego, Peterson said, "It was probably the best four days of my life. I went to 17 different presentations."

Sturgeon said Kieft set up his gift to ease the minds of the faculty and students who came behind him.

"Doc said 'It's not your job to worry about the money, it's about doing good science,'" said Sturgeon. 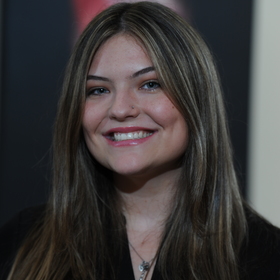