Monmouth, Ill. (07/14/2022) — After a national search, Holly Tharp, who was previously Monmouth College controller, has been named vice president for finance and business at the College.

She replaces Melony Sacopulos, who was named associate vice chancellor for capital financial management at the University of Pittsburgh in April.

After earning her bachelor of business degree in human resources and marketing from the Western Illinois University in 2006, Tharp earned a second bachelor's in accounting from WIU in 2010. She then received a master's degree in higher education administrative services from McKendree University in 2013.

Previous to Monmouth College, Tharp worked more than six years at WIU in positions that included assistant bursar, accounts payable manager and accountant. She began her affiliation with Monmouth in 2017, serving 4-1/2 years as assistant controller and since September 2021 as controller.

"In both of these roles, and in her work since Melony's departure for the University of Pittsburgh, Holly has demonstrated her devotion to the College and the community, her keen intelligence, and her ability to think and act as a strategic partner to grow revenue by recruiting more students and retaining them more effectively," said President Clarence R. Wyatt. 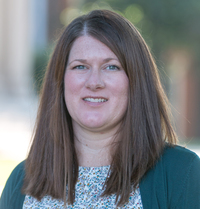 Holly Tharp has served as Monmouth's controller for the past year and been on the College's staff since 2017.