Monmouth, Ill. (02/26/2021) — With a little luck at the end of this year, Monmouth College biology professor James Godde will be able to continue a personal streak he began in 2006.

Godde has worked on an academic project outside of the United States every year since then, and he already has his foreign travel plans for 2022 - thanks to a Fulbright U.S. Scholar grant he recently received to study at the University of Murcia in Spain.

The Core Fulbright U.S. Scholar Program sends about 800 U.S. scholars and professionals per year to about 130 countries, where they lecture and/or conduct research in a wide variety of academic and professional fields.

This will be Godde's second Fulbright. The first one he received was in 2015 to study in the African nation of Mauritius, His international streak started by leading a Monmouth College study-abroad trip to Japan in 2006, the year before he spent a sabbatical there.

Although travel was severely limited by the pandemic in 2020, Godde had taken Monmouth students on a study-abroad project to Belize and Guatemala in January of that year when things were still normal. He hopes to lead another student trip during Christmas break at the end of this year, and the timing for that trip to El Salvador figures to be in his favor to depart while the calendar still reads "2021."

During his sabbatical in the 2022 spring semester, Godde will study "Biotechnology and Molecular Biology" in Murcia, a city of nearly 450,000 in southeastern Spain.

"I'll be looking in bacteria for proteins that are complex with DNA, kind of similar to the way higher organisms do it," he said. "My project is the evolution of histone-like proteins in bacteria. The gist of it is I'm really into DNA and chromosomes and things, and bacteria have simpler ones, but that's a good place to start looking at how it all kind of came about for us."

Although Godde has been to Spain before, he is looking at the 2022 trip as a do-over of sorts.

"Spain was officially the first foreign country I've ever been to," he said. "But I was 14, and I was on this teen mission trip, and it was just a stopover to get to South Africa, where we spent a number of months. We got to Madrid and got a hotel room, and the next day, there was a tour of Madrid. But I was so jet-lagged I didn't even go on the tour - I just slept in."

Godde has since learned that you can always sleep later.

"I regret that now, because now I know to push myself when traveling," he said. "You've got to live in the moment. I even wrote about that in my Fulbright application. I said I needed a do-over on Spain because I had been there, but I haven't really been there."

Godde's main focus is to learn more about science, but he'll be happy to multi-task, also improving his Spanish.

"When I travel with students, I tend to take them somewhere warm and somewhere that typically speaks Spanish," he said. "Hopefully, I can get better and better at it. I'm not great at it, and I often rely on students to help me out on those trips, so I would like to get better." 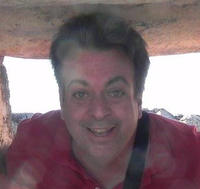 Monmouth College biology professor James Godde is pictured during a study-abroad "J-term" trip with students in Mexico in 2017.