A group from Monmouth College celebrated the first day of 2022 in a much more adventurous fashion, traveling via horseback to the top of a volcano in the Central American country of El Salvador.

"I've got to imagine that was a first for some," said well-traveled Monmouth biology professor James Godde of the equine companions for the 13 students who made the trip. "Many of the trips I've led have been over Christmas break, and I try to schedule a really cool experience on New Year's Day, like when our group visited Machu Picchu (in Peru). I wanted to have a super-cool experience in El Salvador, and this really was."

"I enjoyed the trip, and I think the students got a lot out of it, perhaps more than they realize now," said Distin. "I generally liked seeing them do things outside of their comfort zone. Riding horses up a mountain fit that description, but it was far from the only thing."

"While El Salvador wasn't my first time out of the country, it certainly took me the furthest out of my comfort zone than any travel I've done in the past," said Shannon Wilbourne '22 of Chicago. "Professor Godde will be the first to tell you getting uncomfortable is what travel's all about."

The students had taken an "Academic Travel" Reflections course taught by Godde that emphasized ideas such as mindful travel and making pilgrimages. It was similar in that respect to other Reflections-inspired trips that Godde has led to Colombia and Belize, which also featured visits to old churches, Mayan ruins and other sacred sites.

A slight difference was that this year's group consisted of students from two Godde classes. His planned trip abroad with the students who took his class in the fall of 2020 was canceled due to the pandemic.

Godde, however, kept his string of years traveling abroad intact. His Belize trip ended in the first days of 2020, two months before the pandemic began. The El Salvador group left the United States on Dec. 28, providing him his 2021 international travel just days under the wire. His streak started by leading a Monmouth College study-abroad trip to Japan in 2006, the year before he spent a sabbatical there.

"This was my first time in El Salvador," said Godde. "One of my criteria when planning these trips is to try to find a brand-new location. I want it to be a new adventure."

Godde was only back in the United States from El Salvador for about 48 hours before departing for another adventure, this time to Spain. He will spend his sabbatical as a Fulbright Scholar at the University of Murcia, teaching and conducting research.

"Spain's just as bad off as the U.S. is right now with the virus," said Godde. "I wonder what it will be like when I get there. I don't know if it will remote or in-person or what the situation will be."

In Murcia, Godde will certainly be asked to draw upon his knowledge of Spanish, which improves with each of his trips. In El Salvador, though, the go-to person was Wilbourne.

"One highlight of the trip was interacting with the people of El Salvador," said Wilbourne. "We spent New Year's Eve in the streets of Suchitoto lighting off fireworks with neighborhood kids. The trip was a great opportunity to put my Spanish into practice and connect with the locals."

Other than Wilbourne, "We struggled with the language barrier," said Distin. "We ate good food and questionable food, heard us called 'gringos' many times, took cold showers, and were immersed in the culture of small-town El Salvador."

Godde said some eyebrows were raised over traveling to El Salvador, and that caused some students to stay home, along with COVID concerns. But he said those who made the trip were impressed by the country, which is bordered by Honduras, Guatemala and the Pacific Ocean.

"We saw the really good side of El Salvador," said Godde. "It can have a bad reputation - even scary - but we never had a single trouble. It's not on a lot of people's 'to see' list, but it really should be, because it was fabulous."

"I think the greatest highlight of the trip was scaling the active volcano Izalco, which is considered the second most difficult volcano to climb in El Salvador," said Wilbourne. "That hike is the most terrifying and impressive feat I've accomplished in my life. Before we even started our trek up the mountain, we had to walk down 1,475 steps. After the grueling descent from the summit of the volcano, down sand and loose rocks, we had to make our way up those steps again. The experience might not have felt like a highlight in the midst of it, but I'm proud to say I've completed it."

Other highlights of the trip were relaxing at Lago de Coatepeque, a crater lake in the western portion of the country, and spending the last full day in the country on the beach.

"I've learned from experience to schedule the beach day later in the trip," said Godde. "That way, I can tell the students, 'If you get through this, there's the beach day at the end.'" 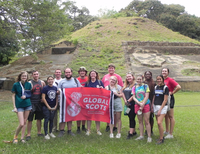 The Monmouth group is pictured at the Casa Blanca archaeological site in Chalchuapa. 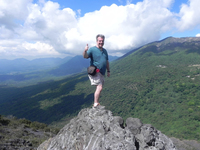 James Godde is pictured at the top of the Izalco Volcano in El Salvador. 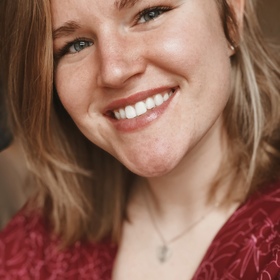