In addition to publishing the annual issue of Midwest Journal of Undergraduate Research this spring, the journal's editorial staff of students and faculty mentors also produced a special edition of MJUR that was released in December.

"It's a great journal," said Monmouth faculty member Judi Kessler, who serves as one of the mentors for MJUR. "We have a nice selection of disciplines represented. It turned out really well. We're very pleased."

Elias Shammas, who graduated from Monmouth last December with a degree in political science, has an article in the 2018 edition: "Make Syria Great Again? A Theoretical Case for the Transnational Cultural Transmission of Trump Support among Arab Americans."

The special December MJUR issue features seven submissions from the College's inaugural Conference of Undergraduate Research & Scholarship, which was held on campus in April 2017.

"Typically, the criteria for submissions for a conference proceedings issue are not as strict as they would be for a regular issue, but we were delighted by the quality of the submissions," said Kessler.

Kessler said the inaugural conference was a success, with about 70 visitors to campus joining two dozen Monmouth students and faculty. Pulitzer Prize-winning journalist and author Isabel Wilkerson gave the conference's keynote address. Monmouth's next Conference of Undergraduate Research & Scholarship will be held in April 2019.

Kessler said a talented staff made the daunting task of producing two MJUR issues much easier.

"We've never put out two editions in one (academic) year," said Kessler. "We thought, 'Are we crazy?' But thanks to our outstanding student editors, we pulled it off."

Isaac Willis '18 of Mackinaw, Ill., served as the coordinating editor for the latest edition of MJUR, while Daniel Hintzke '18 of Monmouth was the operations editor. Kessler said that Amjad Karkout '18 also played an important role.

"We really gave a lot of autonomy to our student editors, and they did a spectacular job," said Kessler. "Amjad was also invaluable. He's our genius in InDesign, so he made a massive contribution in formatting and design."

Karkout will graduate on May 13 but will remain at Monmouth an additional semester to help prepare for the 2019 conference.

Four Monmouth students who served as MJUR editors during the past year will be part of the 12-member editing team next year: Jamie Donahue '19 of West Peoria, Ill., Logan Evans '21 of Glasford, Ill., Lily Lindner '20 of Morton, Ill., and Hadley Smithhisler '20 of Valley City, N.D. Donahue will be operations editor for the 2019 edition, while Hunter Wollwert of Serena, Ill., will serve as coordinating editor. 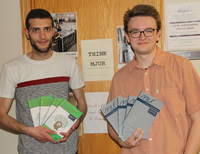 Monmouth College seniors Amjad Karkout (left) and Isaac Willis hold the two editions of MJUR that were published during the academic year. 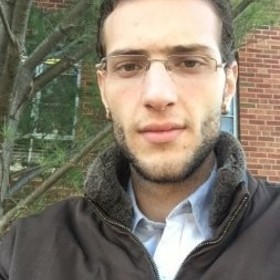