Monmouth, Ill. (02/16/2021) — When Monmouth College theatre professor Todd Quick was planning his department's next production in the midst of a pandemic, he decided to think small.

Quick will direct a two-person cast in Rajiv Joseph's 2009 play Gruesome Playground Injuries. It will be staged Feb. 25-28 at the College's downtown Fusion Theatre, 230 S. Main St., and will also be available to view online.

Quick made one concession on the cast size - he named a pair of them. Kaitlyn Fisher '22 of Monmouth and Cullen Marshall '22 of Kewanee, Illinois, will team up for the Thursday and Saturday evening performances, playing the roles of Kayleen and Doug, while Emma Wohlstadter '23 of Macomb, Illinois, and Andrew Cliffel '23 of Lakewood, Ohio, will perform those roles on Friday evening and Sunday afternoon.

"We have two sophomore theater majors in the show and two juniors who are non-majors, and all four of them are just knocking it out of the park right now," said Quick of rehearsals.

Over the course of 30 years, the lives of Kayleen and Doug intersect at the most bizarre intervals, leading the two childhood friends to compare scars and the physical calamities that keep drawing them together.

Quick read the play shortly after it was written and remembers being "really struck by the quality of the writing and how beautifully drawn each of these two characters was. It's sort of stuck with me since then and I've been keeping it on my radar, waiting for an appropriate time to pull it out for a production."

With COVID-19 concerns on everyone's minds, Quick deemed this season the appropriate time.

"It's a rare opportunity during a global pandemic to still see live theater," said Quick. "Audiences can come down to the Fusion Theatre and see live theater in person, right now, which is really exciting. We're operating at reduced capacity, so that everyone is safely socially distanced while they're in the venue. People can see live theatre and have that communal event that we've all been missing during the pandemic."

And then there's a second option.

"For those people who aren't right here in Monmouth or who don't feel comfortable attending theatre in person right now, we will be streaming the performance with both casts, so depending on which cast you'd like to see, there will be an option to see a recorded version of the show, as well."

The small cast is not only ideal for a pandemic, but it also helps with character development and allows Quick to play to one of his strengths.

"It's a rare treat for me because I'm primarily a teacher of acting," he said. "So this is right in my wheelhouse to really focus on these little human moments between the two characters."

Fewer actors means more teaching time for Quick and more time for the audience to get to know the two characters.

"When you have a dozen characters in a 90-minute play, you can't bring the characters to life with quite the same level of detail," he said. "In this play, the playwright was able to create real people. When we read the play, I feel like we're meeting two fully realized human beings and that's what I want the audience to see and what I want them to walk away with - this sense of not even realizing that anyone was acting, that we were just having this intimate look at the lives and relationships of these two people."

Although Quick was familiar with the play, neither he nor his actors and crew have seen it staged, and he said that's unique.

"It's a rare thing to have a group of theatre artists where no one has been in the show before, no one's worked on it, no one's seen the play produced before," he said. "So we're all coming in really fresh and what that allows us to do is really focus on the script. We're not trying to shake a different image of the production, we're not trying to differentiate our production from anything else because we have a pretty clean slate, a fresh canvas."

Monmouth College will present "Gruesome Playground Injuries" at 7:30 p.m. Feb. 25-27 and at 2 p.m. Feb. 28 at its downtown Fusion Theatre, 230 S. Main St. Tickets and online passes are $10 for adults, $8 for seniors and Monmouth faculty and staff, and $6 for Monmouth students. Ticket information is available at monmouthcollege.edu/academics/theatre/current-production-season/. The production contains mature content and language. 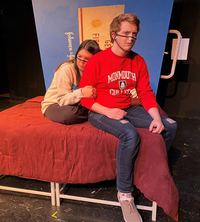 THE JUNIORS: Classmates Kaitlyn Fisher and Cullen Marshall will perform their roles in Monmouth College's production of "Gruesome Playground Injuries" on Thursday and Saturday, Feb. 25 and Feb. 27. 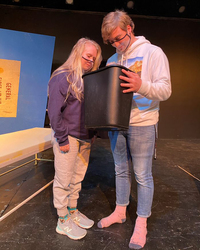 THE SOPHOMORES: Monmouth College theatre majors Emma Wohlstadter and Andrew Cliffel will be on the Fusion Theatre stage for the Friday, Feb. 26, and Sunday, Feb. 28, performances of "Gruesome Playground Injuries."